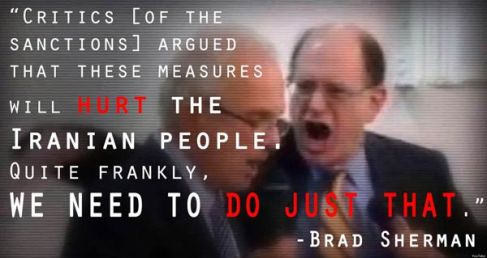 Sherman, who says he wants sanctions to “hurt the Iranian people,” said on Wednesday he wants to block part of the deal that would enable Iran to receive new parts for its aging civilian aircraft fleet. That is unacceptable.

If you want to know what you can do against this, read this and share it on Facebook:

Ahmad, a survivor of chemical warfare during the Iran–Iraq war of 1980-88, has already had more than 50 operations on his eyes. He uses multiple inhalers every day to alleviate the pain from his lungs, 60% of which were burned, and he takes a multitude of pills just to stay alive.

His story, which exemplifies the consequences of warfare conducted with weapons of mass destruction, is complicated by the fact that western sanctions against Iran have added an additional layer to the suffering: the shortage of medicine.

Doctors Matthias Jochheim of Germany and Gunnar Westberg of Sweden decided to take action to get vital medicines into Iran after they saw first-hand how the sanctions regime was causing critical pharmaceutical shortages in the country.

“Suffocating sanctions could lead to a grave economic situation in Iran and to a shortage of food,” the source said. “This would force the regime to consider whether the nuclear adventure is worthwhile, while the Persian people have nothing to eat and may rise up as was the case in Syria, Tunisia and other Arab states.”

“In the words of a leading advocate and architect of the policy, Senator Mark Kirk (R-IL), the goal of the sanctions should explicitly be to “take the food out of the mouths of the [Iranian] citizens“. “

“Another leading proponent, House Representative Brad Sherman (D-CA), has said “Critics of sanctions argue that these measures will hurt the Iranian people. Quite frankly, we need to do just that.” “

“The sanctions imposed on the Islamic Republic of Iran have had significant effects on the general population, including an escalation in inflation, a rise in commodities and energy costs, an increase in the rate of unemployment and a shortage of necessary items, including medicine,” he said.

“The sanctions also appear to be affecting humanitarian operations in the country,” he wrote. “Even companies that have obtained the requisite licence to import food and medicine are facing difficulties in finding third-country banks to process the transactions.”