The wording sailors is quite amusing. If two Iranian ships full of highly armed soldiers would have had the same kind of mechanical failure both at the same time and would accidentally enter US waters, they would rather have been called: militants, elite soldiers, Qods-Force or what ever seems more threatening.

But in this case all the international press is repeating “sailors”, and even though in this case like in other cases it is clear that these sailors were most probably on a spy mission like in this case (the source is referenced: The Guardian) or like US drones that regularly accidentally enter Iranian Air space.

Anyhow Iran’s reaction has been very mild. Looking back at what Turkey did as a Russian Airplane entered its Airspace for a few seconds, it shows how much Iran has actually softened its stance. While this is good for the “Sailors” it seems that some GOP candidates are quite frustrated that the Americans were set free as easily:

US “boats”: speed boats in full camouflage and highly equipped with weapons: 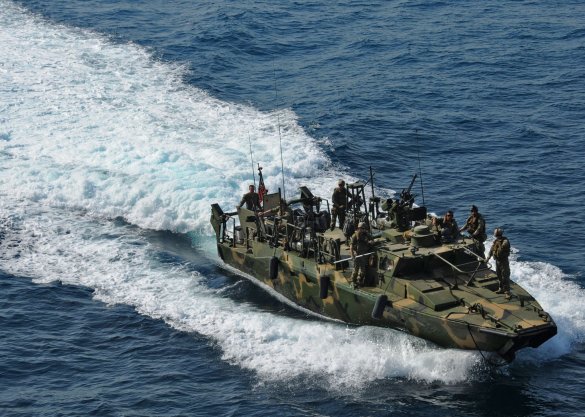 More info about the boats: http://www.popsci.com/what-were-boats-that-iran-captured?src=SOC&dom=fb

“On their way from Kuwait to Bahrain”:

These highly trained professionals should be trained better in navigation.

And here their weapons:

Great article by Glenn Greenwald in the Intercept:

This conflict is not going on forever as stated by many people who lack the knowledge and hence oversimplify and trivialize. Less than two decades ago there was not such a violent conflict. Hence this is not an endless conflict and we can go back to the situation that we had not too long ago.

We have to take a look at the beginnings, analyze the ones who profited most and stop to listen to their rhetoric

Another interesting article on this topic is the following one written by Seymour Hersh the Pulitzer Prize winner for the New Yorker in 2007. What he wrote then can explain a lot of things that are happening today in the middle east:
http://www.newyorker.com/magazine/2007/03/05/the-redirection

If you ask me the Sunni Shia conflict as it has gotten momentum after the Iraq war had three main reasons:

Iran was in its best position right after Saddam was removed. A huge military threat next to Iran was removed making Iran the undisputed power after Israel in the region. With the start of the sectarian conflict Iran has only lost, as this conflict has inflicted huge costs on Iran. It is also interesting to point out that Iran was in its policies mainly opposed to Israel was never going against Sunnis. Infact Iran’s opposition to Israel was on behalf of Sunni Palestinans, who were supported by Iran and Syria more than by any country in the Persian Gulf region (mostly crazily rich countries that never took any Sunni refugees while advocating them selves as truly Sunni nations).

But how would these profiteers fuel the conflict and keep it rolling:

Saddam was thinking that (Sunni) Arab Iranians would be oppressed in Iran (as Shia are oppressed in many Arab countries) and would join forces with their Arab “brothers” from the Iraqi Army, but the opposite was the case Arab Iranians felt more as Iranians than as Arabs and fiercely defended their homeland Iran and stopped the mighty Iraqi Army until the surprised Iranian army could finally send help to the Iraqi border.

This story beautifully shows how Arab leaders speculated and finally invented an oppression of the (Sunni) Arab minority in Iran, and were surprised by the realities on the ground, that these allegedly oppressed minorities felt pretty much Iranian, and nearer to their fellow Shia Iranians than to external Sunni and even Shia Arabs.

Great book that covers the Iraq-Iran war and other conflicts in the Middle East:

You hear only about Iran, but there are countries that are worse:

In Egypt, courts handed down at least 509 death sentences during 2014, 400 more than recorded during the previous year. This included mass death sentences against 37 people in April and 183 people in June following unfair mass trials.

From all countries above who do you think is on the biggest drug smuggling route of the world?

Afghanistan presently produces 80 percent of the world’s heroin which provides billions of dollars in illicit profits for the powerful drug Mafia. Heroin trafficking and production have flourished under US military occupation and transformed Afghanistan into a dysfunctional narco-colony.

In the past 30 years, 3,734 Iranian border guards have been killed and more than 12,000 wounded in clashes with smugglers.

Iran has a real problem with this:

Iran lies directly in the path of the world’s largest flow of heroin.
There are some analysts who describe Iran’s heroin addiction problem as the “worst in the world.” Estimates of the number of addicts vary widely – from one million to more than three million habitual drug users. A 2006 report estimated that 8 percent of the adult population was addicted to drugs.

So what should a 3rd world country crippled under sanctions do? Build more jails? Hold more costly prisoners? Be more morale than the US and stopping executions at all? Yes, should it? But then why are you not so much upset when there are death sentences in the US? Are death sentences, invasions, meddling in other countries ok when you are a democracy? Don’t you think these are double standards?

Also what do you think about: US police killings headed for 1,100 this year, with black Americans twice as likely to die. (The Guardian)

How convenient isn’t it? No court costs, no prison costs and no bad image, because all people only compare death sentence numbers. Also, let’s try a test: replace in the title of the Guardian article (above in blue) US with Iran, and black Americans by an arbitrary Iranian minority. The conclusion would be clear, right? (White) US republicans would be furious even the UN, Amnesty and Human Rights Watch would be all over the story.

Speaking of all this: Yes, Iran is a dictatorship, and yes every execution is one execution too much, but after reading this article it should be clear that we have clearly double standards here, we comfortably ignore Iran’s hard situation trying to stop drug smuggling (and thus also protecting not only Iran’s youth but also other countries down the road) while being under sanctions. It should be also clear that focusing on just Iran can only have one reason: political motivation.

A 2009 World Public Opinion poll found that 51 percent of Iranians hold a favorable opinion of Americans, a number consistent with other polls, meaning that Americans are more widely liked in Iran than anywhere else in the Middle East. The U.S. favorability rating isn’t even that high in U.S. allies India or Turkey, and is two and half times as high as in Egypt. The same survey found that almost two-thirds of Iranians support restoring diplomatic ties with the U.S. (Iranians’ view of U.S. leadership is much worse, at 8 percent as of early this year.) But even these figures are likely on the low end of actual sentiment, as many Iranians might fear expressing such views to a strange pollster, out of fear of drawing the suspicion of the authorities…

Interested in reading more about USA-Iran? Here is a nice collection: http://theotheriran.com/category/usa/

Putting two and two together, Mohammad Javad Zarif’s recent travels and Russian Foreign Minister Sergei Lavrov’s recent chat with Saudi FM Adel al-Jubeir point to a coordinated push by Bashar al-Assad’s two biggest allies, Russia and Iran, to follow-up the nuclear deal by recharging some kind of peace process in Syria. In fact, Zarif is supposed to be in Moscow on Monday to meet with Lavrov and discuss, you got it, Syria.

So far, Russia’s efforts at building consensus on a Syrian deal that allows everybody to focus their fire on ISIS have been decidedly less successful than Iran’s, though to be fair Zarif has been mostly talking to friendly audiences in Lebanon (Hezbollah leader Hassan Nasrallah) and Damascus (Assad himself), while Russia has been talking to the Saudis and the “legitimate” Syrian opposition. Lavrov’s meeting on Thursday with Khaled Khoja, the head of the Syrian National Coalition, apparently…

Iranian Foreign Minister Mohammad Javad Zarif is on a bit of a diplomacy jag in the aftermath of reaching the nuclear agreement with the P5+1. On Tuesday and Wednesday he was in Lebanon, where he met with Lebanese Prime Minister (and acting President, on account of they don’t currently have one) Tammam Salam and other top Lebanese politicians, to talk about finding a way to end the Syrian civil war and to collaborate on regional security issues. He also met with Hezbollah leader Hassan Nasrallah, and what makes that interesting is that Zarif’s chat with Nasrallah immediately preceded the announcement of a 48 hour ceasefire in the Syrian border town of Zabadani, where government/Hezbollah fighters have been pressing a force of Syrian rebels (mainly Ahrar al-Sham) pretty hard for the past several weeks. Talks on that ceasefire have reportedly been going on for a month, with Turkish 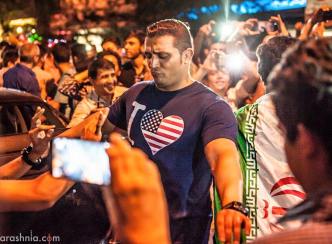 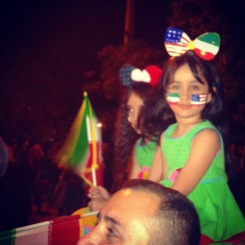 Do you want to see more US friendly Iranians, or hear the stories from Americans who really have been in Iran instead of speculating about it from the far?
Are you interested in seeing how Iranians reacted to 9/11?

Iran’s Jews have given the country a loyalty pledge in the face of cash offers aimed at encouraging them to move to Israel, the arch-enemy of its Islamic rulers.

The incentives — ranging from £5,000 a person to £30,000 for families — were offered from a special fund established by wealthy expatriate Jews in an effort to prompt a mass migration to Israel from among Iran’s 25,000-strong Jewish community. The offers were made with Israel’s official blessing and were additional to the usual state packages it provides to Jews emigrating from the diaspora.

However, the Society of Iranian Jews dismissed them as “immature political enticements” and said their national identity was not for sale.

The Israeli newspaper Ma’ariv reported that the incentives had been doubled after earlier offers of £2,500 a head failed to attract any Iranian Jews to leave for Israel.

Iran’s sole Jewish MP, Morris Motamed, said the offers were insulting and put the country’s Jews under pressure to prove their loyalty.

Despite the absence of diplomatic ties with Israel, Iranian Jews frequently go there to visit relatives.