The Iranian leadership is intelligent enough to not start a war, they are far away from the crazy maniacs, as they are represented by the warmongering fraction:
http://theotheriran.com/2014/10/19/irans-president-has-more-cabinet-members-with-ph-d-degrees-from-u-s-universities-than-barack-obama-does/

Even Israeli General Benny Gantz sees it like that:
http://edition.cnn.com/2012/04/25/world/meast/israel-iran/

here also some must read articles about Iranians and the US:
http://theotheriran.com/tag/usa/

In an interview with NBC, Zarif said that “Iran saved the Jews three times in its history,” insinuating that Netanyahu should brush up on his history lessons.

Zarif said Netanyahu distorts both the current reality and the writings in Jewish sources and the Bible.

Source of this great picture: https://sitanbul.wordpress.com

As the nation of Iran commemorates the 36th anniversary of the Islamic Revolution of 1979 which overthrew the dictatorship of the U.S.-supported monarch Shah Mohammad Reza Pahlavi and led to the establishment of the Islamic Republic of Iran – a nation Western imperialists privately admit has been a thorn in their side ever since by thwarting their designs for regional hegemony in the so-called “Middle East”. Though the aims of the revolution were by no means unanimously agreed upon, with many not supporting the establishment of an religious-based theocracy, it cannot be denied that Iran has been a source of resistance against the ambitions of the globalists and imperialists. Nor can it be denied that the Shi’ite nation remains in the cross-hairs of the U.S. Military establishment and its Israeli allies who constantly sound the drums of war by asserting that Iran seeks to develop a nuclear weapon. The profound hypocrisy of…

please take a close look to the graphic here and read the text below it: 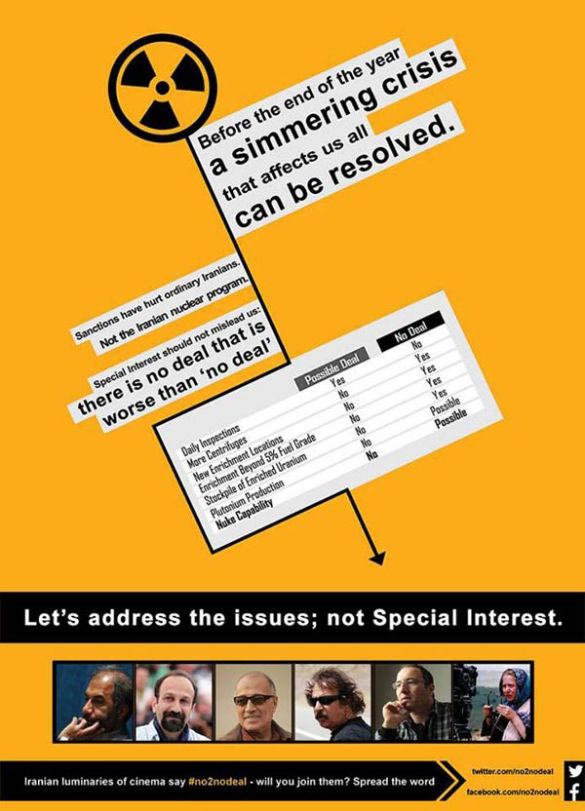 No deal is worse for the west (no control at all, Iran can ditch the NPT at all and use its full power to go nuclear), and for the Iranian public (the only ones in Iran who are suffering):
https://100wordz.wordpress.com/2013/06/01/ban-ki-moon-iran-facing-difficulties-to-import-food-and-medicine/

BTW Iranians will not standup against the regime, because of hurting sanctions.
They are too busy having 3 jobs to support their family because of the sanctions.

Even if US and Israeli politicians would like to see it this way:
https://100wordz.wordpress.com/2013/06/02/netanjahu-aid-irans-citizens-should-be-starved-in-order-to-curb-tehrans-nuclear-program/

The sanctions could not stop Iran to go from approx. 3k centrifuges to 19k centrifuges, only a deal can. In the case of the deal they are willing to go back to 6k centrifuges and export enriched uranium out of the country, under IAEA supervision.

You think you know about Iran and Iranians?? Think twice:

Netanyahu is telling the lie about nuclear weapons in Iran since 1992. He said in 92 that Iran is 3-5 years away from having the bomb:
http://www.csmonitor.com/World/Middle-East/2011/1108/Imminent-Iran-nuclear-threat-A-timeline-of-warnings-since-1979/Israel-paints-Iran-as-Enemy-No.-1-1992

2012 He made a big show in front of the UN that Iran will soon have nuclear weapons, already knowing the Mossad reports that were saying that Iran is not even trying to build nuclear weapons:
http://www.cbsnews.com/news/report-netanyahu-iran-bomb-claim-contradicted-mossad/

Also at home he is lying:
http://www.timesofisrael.com/netanyahus-said-to-keep-real-kitchen-off-camera/

US intelligence agencies see it the same way:
http://www.nytimes.com/2012/02/25/world/middleeast/us-agencies-see-no-move-by-iran-to-build-a-bomb.html?_r=0

Here you’ll see a video of a presentation Netanyahu made before a congressional committee in 2002 in which he encouraged a US attack upon Iraq. “A nuclear-armed Saddam will place the security of our entire world at risk,” he says at one point. Almost the same words he used now about Iran. It seems very much as if this man has been advocating war throughout much of his adult life.

A war that cost the US tax payer 2 trillion dollars, thousands of dead marines, and tens of thousands with Post Traumatic Stress Disorder(PTSD) and or handicapped.

Why do people want an escalation with Iran? Do they want get their hands bloody on more Iranian lives?

Iranians have nothing against the people of Israel or Jews at all. Please take a careful look at these posts:
http://theotheriran.com/tag/jews/

Here is what Human Rights Watch writes abou the Bedoon who are one third (300.000) of the native population of Kuwait:

Kuwait practices a system of institutionalized discrimination against its residents known as Bedoons, long-time inhabitants who have been denied Kuwaiti citizenship and are now being rendered stateless. Barred from employment, denied education for their children, restricted in their movements, and living under the constant threat of arbitrary arrest and deportation; Bedoons are a community of “have nots” in one of the wealthiest countries of the world. At the same time, tens of thousands of Bedoons who fled Kuwait during the Iraqi occupation have been barred from returning to their country.

After decades of treating Bedoons as citizens and repeatedly promising to confer formal citizenship on them, the Kuwaiti government reversed its practice and declared them illegal residents of the only country they have ever known. Although the policy was adopted before the Iraqi invasion, it has intensified since the Kuwaiti government was restored to power following the victory of the Desert Storm military campaign. Kuwaiti authorities have justified their policy on the theory that Bedoons are illegal aliens and therefore are not entitled to live in Kuwait or enjoy the basic rights to which citizens and lawful residents are entitled.

The Human Rights Watch investigation summarized in this report lasted several years and included interviews with over 500 Bedoons in Kuwait and the diaspora. It also included interviews with Kuwaiti government officials, members of parliament, judges, lawyers and others with knowledge on this subject. We also examined Kuwaiti laws, court cases and relevant official documents. We found the following:

Bedoons today number about 300,000, one third of Kuwait’s native population, an estimate based on Kuwaiti official documents. Nearly half of them still reside in Kuwait while the rest are languishing in exile, mainly in Iraq, because Kuwait blocked their return after the war.

Most Bedoons were born in Kuwait, have lived there all their lives-many Bedoon families have lived in Kuwait for generations-or have close family ties in the country. For decades, they were treated as lawful residents and effectively citizens in every aspect of their lives. They were repeatedly promised formal Kuwaiti citizenship. About 30,000 of them are spouses of Kuwaiti women or children of Kuwaiti mothers. Many others have siblings or other close relatives who are Kuwaiti citizens.

The policies adopted by Kuwait since 1985 have resulted in widespread dislocation and extreme hardship. Bedoons were dismissed en masse from their government positions, with the exception of few thousand Bedoons who have been reinstated in the military and police. Bedoons are no longereligible to work in the private sector or receive most basic government services.

Classified as illegal residents, they are no longer issued civil identification cards, driver’s licenses or travel documents, putting most Bedoons under virtual house arrest. They are not permitted to travel abroad, including for medical emergencies or religious pilgrimage, unless they accept never to return to Kuwait.

Because their presence in Kuwait has been declared illegal, Bedoons are vulnerable to harassment and exploitation. As they are fearful of the authorities, they refrain from filing complaints and limit their movement to their neighborhoods, where they can avoid checkpoints and harassment.

Having been denied employment and other sources of income, most Bedoons live in squalid slums threatened with eviction from their homes. Many have exhausted their limited savings and are living on charitable donations, which provide them with little more than subsistence levels of existence-in a land enjoying one of the highest standards of living in the world.

Kuwaiti law explicitly excludes citizenship and residency decisions from judicial purview, thus preventing Bedoons from challenging governmental decisions denying them citizenship or lawful residence in the country. Because of this exclusion, Kuwaiti courts have only challenged the government’s position on the Bedoons in the course of criminal proceedings where citizenship or residency status was relevant. In the few cases where Kuwaiti courts were able to examine the government’s treatment of the Bedoons, they ruled that the Bedoons enjoy a special status that immunizes them, for example, from expulsion from the country. The government has ignored these rulings and since the end of the war issued over 24,000 expulsion orders for Bedoons.

Most Bedoons interviewed possess documents indicating that they would have qualified for Kuwaiti citizenship had the process been applied fairly and transparently. The authority to decide citizenship is reserved for the Ministry of Interior and the Emir of Kuwait. Because this discretionary process has not been open to challenge, many Bedoons were denied citizenship simply due to the fact that the government failed to act on their applications or provide them with an adequate opportunity to prove their claims.

By successively amending citizenship laws, the government limited the Bedoons’ eligibility for citizenship. Many Bedoons were denied citizenship because the government failed to act on their applications in a timely manner, i.e., before the law was changed. The amendments were

implemented retroactively to applications submitted (but not acted upon) before the amendments were adopted.

The totality of the treatment of the Bedoons amounts to a policy of denationalization of native residents, relegating them to an apartheid-like existence in their own country. The Kuwaiti government policy of harassment and intimidation of the Bedoons and of denying them the right to lawful residence, employment, travel and movement, contravene basic principles of human rights. Bedoons clearly have a right to residence in Kuwait by reason of the simple test of their ties to Kuwait and no other-they have nowhere else to turn. Having lived in Kuwait for generations, treated as citizens for decades and repeatedly promised Kuwaiti citizenship, they acquired vested rights which may not be so arbitrarily taken away. It is an arbitrary policy that treats children born in Kuwait, including children of Kuwaiti mothers, as illegal residents who should leave the country, simply because their fathers were classified as stateless. This treatment is especially egregious considering that it was often government inaction which resulted in rendering the fathers stateless in the first place.

Denial of citizenship to the Bedoons clearly violates international law which puts wide-ranging and important restrictions on the state’s discretion to regulate citizenship:

Denial of citizenship and lawful residence to Bedoon husbands and children of women who are Kuwaiti citizens violates rules against gender-based discrimination since Kuwaiti men married to Bedoon wives may pass on their citizenship to their spouses and offspring. The Convention on the Elimination of All Forms of Discrimination Against Women (CEDAW), which Kuwait has signed, prohibits such discrimination in nationality laws.

Denying Bedoons the right to petition the courts to challenge governmental decisions regarding their claims to citizenship and lawful residence in the country violates the universal right to due process of law and equality before the law.

By retroactively implementing restrictive citizenship and residency laws, Kuwaiti authorities deprive Bedoons of their vested rights to Kuwaiti citizenship and permanent residence, which they acquired under more liberal laws.